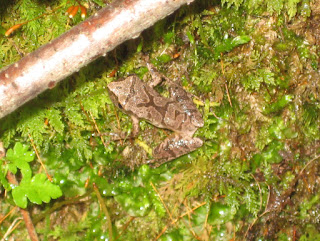 Written and Photographed by: Amanda K. Martin
Walking along in the woods, what might you see? As a herpetologist, I scour the ground floor, looking for amphibians and reptiles. There are plenty of different species that I may find and one in particular is quite easy to identify. The Northern spring peeper or Pseudacris crucifer, its scientific name, has an identifiable mark, an X pattern across its back. The X pattern can come in a variety of colors and sizes, but each individual has one. 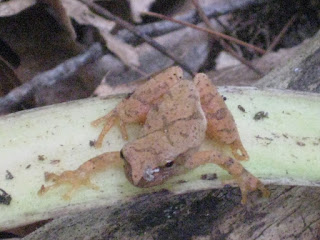 Spring peepers are found in a variety of environments, including marshy woods, non-wooded lowlands, and near swamps and ponds. Males communicate to others through their unique single note, high-pitched call. This note is constantly repeated quickly and sounds like a “peep.” 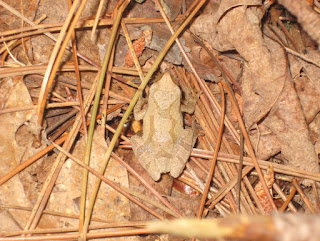 Spring peepers start our life as tadpoles, which are herbivores, grazing on algae or decaying plant material within ponds. Juvenile and adult spring peepers are carnivores, eating many arthropods such as ants, caterpillars, pill bugs, and spiders. Although they may eat a variety of species, spring peepers must also avoid predators. Some common spring peeper consumers are fish, larger frogs, snakes, and birds. 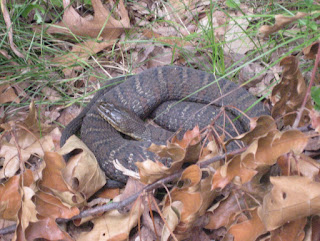 The Northern water snake is a predator of the spring peeper.
Spring peepers may be a least concern species; however they play an important role in their environment. As similar to many frog and toad species, spring peepers are an abundant prey source for predators, while maintaining the populations of small insects and other arthropods. This maintenance of some pest species is beneficial to humans and we should continue to preserve their habitats even though they are common and widespread. The rapid loss of wetlands will have a large effect on these species and could place them on the threatened species list!